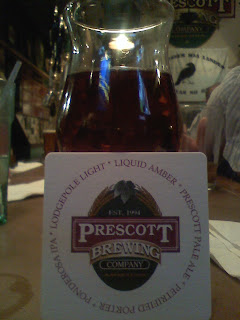 Prescott Brewing just off Whiskey Row in Prescott, Ariz. is a great establishment with a good selection of beer.

Prescott Brewing beers range from Lodgpole Light, Petrified Porter, Prescott Pale Ale, Ponderosa IPA, Liquid Amber and Willow Wheat—these always on tap. Seasonals come and go, but here’s a taste of their winter selections: Achocolypse a chocolate porter, Christmas City Ale with just enough hops and clove—it really is phenomenal. I really can’t say enough about the Christmas Ale, I traveled all the way to Prescott for it!