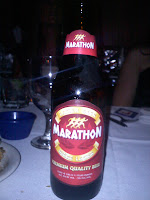 While at a bachelorette party this past weekend at a Greek restaurant in Phoenix, I decided to take a break from watching the belly dancer, smashing plates and yelling “Opa!” I asked the bartender what beers he had in bottle and rattled off a quite a few International beers I had never heard of, Greek of course. Nonetheless, countless lagers, and this girl right here, not a lager fan. The bartender suggested the amber lager, Marathon from Athenian Brewery.
One, I like marathons, well, half marathons that is. Second I like amber beers a whole lot more than I like just plain ol’ lagers. Marathon  is a Greek lager with a full and pleasant taste.
Here’s a little tidbit. Its history began in 1971, when the brand, taking its name from the famous Marathon run (initially run by the ancient messenger Feidippides in 490 BC and still an Olympic sport), was produced in Greece to reach the furthest parts of the world.
Marathon is a lager beer, is 5 percent ABV, easily drinkable, great amber malty taste. Food pairing…anything Greek!
www.atheneeimporters.com