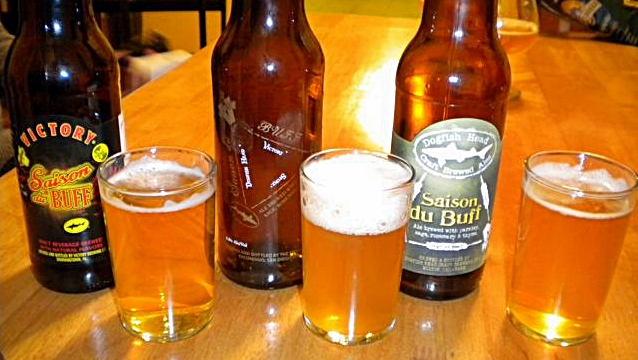 I reviewed Saison du BUFF by Dogfish Head a bit ago and loved it. I was extremely excited to find the other two releases by Stone and Victory,  and try them side by side.

Saison du Buff is collaboration between Dogfish Head (Milton, DE), Stone Brewing Co. (Escondido, CA) and Victory Brewing Company (Downington, PA). Saison du BUFF was first brewed at Stone in 2010, and then replicated at each of the other two breweries – same recipe, same ingredients, three different breweries. I really do wish I had all three of them side by side, to my surprise you can taste a difference between Stone and Victory.

Saison du BUFF is a 6.8% ABV Saison brewed with parsley, sage, rosemary and thyme. Dogfish Head version has a medium body, crisp finish. The Stone version, all the same body, spices but a pronounced more hoppiness to it. The Victory also had an excellent medium body, and crisp finish, but a bit sweeter finish (but not too sweet) compared to Stone’s version. The spices in these beers are very pronounced, but it’s an excellent combination.

The release dates were as follows, if you can find, due try: