Tommyknockers in Idaho Springs, Colo. is fantastic little brew pub between Denver and mountain resorts, like Breckenridge. I head up and down the mountain a few times a week, and often stop at Tommyknockers. Not only do they have great craft beers, but their food is top notch. 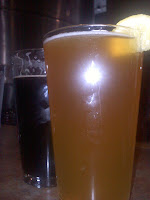 I’m a fan of dark or hoppy beers as you may know from reading, and the last time I was at Tommyknockers I had the Rye Porter. Like any porter it is dark in color; a smooth brown ale with light chocolate and coffee notes. It’s got a great balance of hops and caramel too. Rye Porter is 5.7% ABV and is the 2007 GABF Silver Medal winner, and 2008 GABF Bronze Medal winner.
For a nice balance, my friend had the Jack Whacker Wheat Ale, 4.7% ABV. The Jack Whacker is a unfiltered American-style wheat beer with citrus and lemon grass. This wheat beer has won several awards including 2002 CO State Fair Best Wheat Beer, 2003 Westword Magazine “Best of,” the 2005 GABF Silver Medal and 2006 World Beer Cup Silver Medal.
I have tried several other Tommyknocker beers, which are all very drinkable and enjoyable. The Maple Nut Brown Ale, mmmm delicious, is their most popular bottled beer and Pick Axe Pale Ale is the favorite over the bar with good mild hops. Some of their other beers are: Oaked Butt Head Bock, Cocoa Porter Winter Warmer (perfectly named, so true), Tundrabeary Ale, Black Powder Stout and more.
My favorite foods to pair beer with at Tommyknockers is the grilled jalapeno and cream cheese burger with buffalo blue cheese fries or the pulled pork sandwich.
Tommyknocker Resturant, Pub and Brewery
1401 Miner Street
Idaho Springs, CO 80452
(303) 567-2688
tommyknocker.com