One of many fantastic breweries in Boulder, Colo. Twisted Pine Brewing has been on the top of my list to suggest to folks. 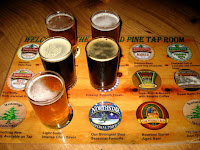 I have been to Twisted Pine a few times now, and each time I am greatly surprised with their seasonal selection. Typically I’m not a fan of fruity beer…unless it’s in a stout. Twisted Pines seasonal Razzy Xpress is an amazing raspberry espresso truffle. I don’t even have to explain myself, beer, espresso and truffle in one. Now, being a Southwestern girl I love chili beer. The Billy’s Chili’s is infused with five fresh—and truly phenomenal. They really like infusing flavors, the Farmers Daughter is a Saison laced with lemongrass or the PoisonFish is a ginger wasabi beer.
Also on tap is the Honey Brown, a brown ale with wild flower honey…yummy. In addition is the Espresso Stout, with an actual espresso shot in each pint. Of course I love my hops and so does Twisted Pine, and worth sampling are the Hoppy Knight India Black Ale, Hoppy Man Imperial IPA and Hoppy Boy IPA.
Now, here is an inside scoop. Twisted Pine will be entering a contest for the hottest beer. It’s going to be called the Ghost Pepper beer infused with 1.4 million scoville units (Peperoncini being 100-500 scoville units). It will be the hottest beer on earth!
I really enjoy Twisted Pine because of the many beers on tap (some of which I did not mention) and different infused flavors.
Twisted Pine Brewing Company
3201 Walnut Street, Ste. A
Boulder, C0 80301
(303) 786-9270
www.twistedpinebrewing.com

One thought on “Twisted Pine Brewing”